From Fat-Phobia to Focus on Fitness

As we all embark on our new year’s resolutions to eat more healthfully, it’s a great time to take a look at the latest studies on how cheese can play a role in a healthy, balanced diet. From anti-inflammatory cholesterol lowering properties in blue cheese, to a new report on kids and snacking, cheese is a rising star in some health circles. 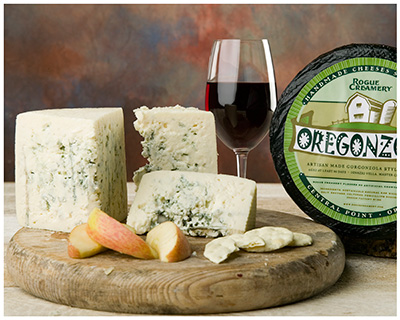 A new British study published in the journal Medical Hypotheses, considered the French Paradox, which points to low incidence of cardiovascular mortality in France despite a diet rich in saturated fats from foods like butter, cheese and foie gras. Early findings point to French consumption of red wine and its beneficial compound resveratrol. Studies outside France did not yield similar results.

The British scientists hypothesized that compounds in cheese, particularly the famous French sheep milk blue cheese Roquefort might play a role in the French Paradox.

This news piqued our interest since our blue cheese has a direct line to the famous French blue. Rogue Creamery founder Tom Vella developed our blues after a visit to the famous caves of Cambolou in Roquefort in 1955 where he learned the secrets to producing fine blue cheese from the cave foreman.

Data collected from the British study shows a positive effect from cheese consumption on lipid profile in blood plasma as well as anti-inflammatory properties which benefit those suffering from diseases like arthritis.

Further, the studies revealed that molded cheeses, including Roquefort, due to secondary metabolites produced by Penicillium roqueforti, have the ability to inhibit cholesterol biosynthesis and may help in the prevention of cardiovascular disease.

A recent study published by the American Academy of Pediatrics notes a positive correlation when consuming high-nutrient density foods like cheese combined with vegetables versus non-nutrient dense snacks like potato chips during snacking.

The study, which tracked the eating habits of 200 children given one of four snacks: cheese only, cheese and vegetables, vegetables only or potato chips. Snacks were freely provided while the children watched 45-minute TV programs.

Children who had the cheese and veggie combo consumed 72% fewer calories and reached satiety, a state of feeling fed or gratified, than the control group who snacked on potato chips. In addition, the effect was more pronounced in overweight children leading the scientists to conclude that the “combination of vegetables and cheese can be an effective means to reduce caloric intake while snacking.”

While moderation is key in a healthy diet and balanced nutrition important, experts have long pointed to the fact that full-fat cheeses lead to feelings of fullness and satisfaction far more quickly than low-fat version and lead many people to consume less while feeling full longer.

We keep a close eye on the latest studies and enjoy seeing cheese-positive news. We knew all along that high quality milk makes our cheese delicious and healthful. We’re glad that word is getting out!